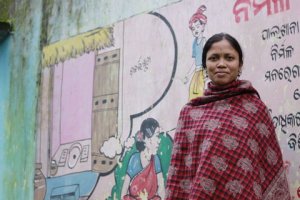 The mural on the wall outside of Chandramani Jani’s home is more message than art. It depicts a sari-clad woman relieving herself behind a bush, looking worried as a man advances. A large thought bubble suggests the woman wishes for a toilet of her own, clean and complete with the privacy of a door.

To Jani, a 34-year-old sarpanch, or elected village head, in the hilly Koraput district of India’s Odisha state, the mural represents a personal mission. She boasts that ever since she had toilets built in her village of Chakarliguda last December, no one in her community defecates outside. A few steps behind every home in the village, well-maintained latrines stand amid kitchen gardens and chicken coops.

“Before we had toilets people used to search for a place to squat. Now it’s easy access,”she said. A few elderly women were hesitant to use the new toilets at first, “but now even they’ve gotten used to the comfort.”

Jani’s pride is not unfounded. The success in her village is rare despite India’s repeated attempts to stop open defecation, a serious risk to health and safety that is on newly elected Prime Minister Narendra Modi’s agenda. More than 620 million people in India defecate outdoors — a much higher rate than in poorer countries like Bangladesh or those in sub-Saharan Africa. Exposure to fecal matter is a leading cause of diarrhea, which kills 600,000 people in the country each year, a third of them children. And as Gardiner Harris reported in July, open defecation and rapid population growth fuel bacterial growth that contributes to malnutrition and stunted growth in 65 million Indian children under the age of five.

The impact goes beyond health, as the mural on Jani’s wall displays. Women, who venture farther from their village than men or children to relieve themselves face additional threats to safety. The link between defecating outside and security was further emphasized by advocates like Wateraid after a fatal rape of two teenage girls in Uttar Pradesh who were walking to a field to relieve themselves earlier this year.

When the government started building toilets en masse in 1999, under an 18 billion rupee ($300 million) initiative to eradicate open defecation by 2019, authorities came up against a problem that has plagued developmental solutions from oral rehydration therapy to mosquito nets: people just weren’t using them. The Research Institute for Compassionate Economics’Sanitation Quality, Use, Access and Trends (SQUAT) survey, which interviewed 22,000 people in five Indian states on sanitation habits, found that 40 percent of households with a working latrine have at least one member who continues to defecate outdoors. That’s partly because, in rural India, defecating far away from the home is considered cleaner than using toilets, said Payal Hathi, one of the authors of the SQUAT survey,

“It’s not enough to build toilets, because even in households that have their own latrines, people do not use them,”said Arundati Muralidharan, a senior research fellow at the Public Health Foundation of India. “There are massive social, cultural norms and behavioral practices that we are looking to influence.”

Changing those norms will be a major challenge for Modi, who has pledged to end open defecation in the country by 2019. In October, he started a nationwide sanitation drive called Swachh Bharat, or Clean India Campaign, which promotes hygiene and sanitation. But any new initiative will have to avoid the fate of the thousands of government-built toilets that remain unused— one major reason a recent study in The Lancet, a British health journal, found that a toilet-building program in Odisha may have had little impact on health.

Jani made it her personal mission to make sure people received and used the new toilets in Chakarliguda, a poor tribal village with relative low literacy levels in southern Odisha. She understood the value long ago, when she built a latrine outside her hut, but the villagers only knew that their families were getting sick from unclean drinking water.

When the leader learned that the district administration would be providing toilets to select villages last May, she knew that she would have to sell the idea to her community first. Although Chakarliguda wasn’t initially picked for the sanitation campaign, Jani, who left school after seventh grade, fought with district officials, repeatedly visiting their offices and drummed up community support from her neighbors.

In July 2013, district sanitation officers worked with Jani and a few young community volunteers to start an intensive campaign called “triggering.”In order to educate and “trigger”community ownership of toilets, the team staged street plays and regular workshops that explained how open defecation was making children sick. (As with most villages in the Koraput region, diarrhea and malaria were the two biggest ailments in Chakarliguda.)

They also used waste mapping and calculations, two viscerally provocative methods that have proved effective in Bangladesh. Sanitation officials had villagers mark on a map where they defecated, and then demonstrated how excrement moved from the fields into their drinking water and food. They also calculated the total weight of human excrement, which for Chakarliguda — a tiny mountainside hamlet of less than 300 people — came out to 52 tons each year.

“We basically showed them how they were eating and drinking” their own waste ,said Kasi Prasad Nayak, who oversees water and sanitation in the Koraput district. “And that had a lot of motivational impact.”

Triggering is a component of the ongoing national toilet-building program, known as Nirmal Bharat Abhiyan, or the Total Sanitation Campaign. But so far, the success of such programs — which are allocated 15 percent of the total campaign budget — has varied wildly. Unlike building toilets, triggering is an abstract effort that’s hard to oversee, and the money for it is often unspent. But, as the case of Chakarliguda shows, the right investment in local leadership goes a long way in changing a community’s attitude.

Here, Jani’s campaigning won over most of the village — important because the health risks of open defecation remain unless most of the community has switched to latrines. To persuade holdouts, the sarpanch used a more aggressive, less kosher, approach.

“I told my people that if they didn’t build toilets and start using them, they wouldn’t get their subsidized rice or pension from the government,”she recalled with a laugh. The villagers knew it was an empty threat — a sarpanch does not have the right to withhold welfare benefits — but it nudged them into compliance.

Every family was on board when the village received toilets last December. The government covered most of the cost and sent engineers to guide them, although households were required to build their own toilets and contribute 900 rupees ($15) toward construction. Free to customize, some families invested in tiles and water storage units, while others expanded theirs to include a bathing room.

Dena Kila, a local resident in the village, said her family bought extra cement to make a solid latrine, and was now installing a pipe for running water. Sitting at her clay stove, Kila said building toilets kept the village pathways cleaner, and that more people washed their hands with soap. And women felt safer.

“I used to only go in the early morning and evening, when it was dark enough to not be visible,”she said. “I had to go in a group and worry about safety risks like wild animals.”

The project has changed daily habits for men, women and children in Chakarliguda, but has had much less impact in villages that didn’t use a similar community strategy.

In 2004, a large nonprofit organization called Gram Vikas built toilets in the hilltop village of Phulband, also in the Koraput district. But 10 years later, most of the structures serve as sheds for lumber and live chickens. Devendra, a 25-year-old laborer and social worker from the village, said Gram Vikas conducted community activities while introducing the toilets, but there was little follow-up, and villagers soon returned to their old habits.

“We need to understand what is driving people to defecate in the open even when they don’t have to,”Muralidharan said of similar failed attempts. “Behavioral intervention needs to go beyond telling people to use toilets to really address some of these underlying factors.”

For Jani, the follow-up was essential. Throughout the process she led a monitoring committee to check in with villagers and their facilities. And she now regularly checks the latrines to ensure that families are using and maintaining their toilets.

This active leadership makes all the difference, said Kuldip Gyaneswar, a fellow with the Ministry of Rural Development who works with the Koraput district administration. While thousands qualify for the Total Sanitation Campaign funding, many Indians slip through the cracks because panchayat leaders and citizens don’t know that they are eligible to benefit. Meanwhile, Jani has become an expert on sanitation in her village and was invited to Delhi to participate in a Unicef-led discussion about promoting sanitation.

You need someone in each village to anchor the program, Gyaneswar said. “Wherever there are strong leaders they are working well.”Toilets built by community demand, he said, were far more effective than supply-driven measures by the government.

“How do you transpose that success to an urban slum where you have highly mixed communities?”she said. “What can be the binding force in a heterogeneous community for an issue that really affects everyone?”

As the Modi administration prepares to invest millions of dollars in building toilets, they will have to address the challenges that come with a country of one billion people. But examples of success are as close as Chakarliguda, or, on a larger scale, right next door in Bangladesh, which has all but eliminated open defecation.

Hathi, of the SQUAT Survey, said that during a recent trip to the country, she was struck by how freely people discussed sanitation, and by how common it was for people to use simple, low-cost latrines that are difficult to find in India. While most people in India could afford the simple latrines found in Bangladesh, they don’t build them because they don’t prioritize owning a toilet.

“Everyone in Bangladesh is working on it. Here we are struggling to have the same kind of dialogue on sanitation,”she said. “It needs to start with Modi and it needs to come down to the local level. We need cricket players, politicians, sarpanches, Bollywood people — everybody.”

Only Real When Shared